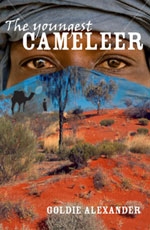 Ahmed Ackbar, a young fourteen-year-old Afghan, has spent six weeks at sea, and is happy to find his land-legs when he arrives in Adelaide with his Uncle Kamran. The year is 1878 and they have come to Australia to join the William Gosse exploration party as cameleers to help map a route from the Overland Telegraph Line at Alice Springs to Perth. Ahmed speaks a little English, so is able to translate into Pashto for the other Afghans in the party – Jemma Khan, Allanah and his uncle.
Ahmed tells the story of the expedition through his diary entries, where we learn that life as a young cameleer is anything but easy. As well as being bullied by Jemma Khan, whenever Ahmed’s uncle is not watching, Ahmed – or Alfred, as the English refer to him – must contend with homesickness, the harshness of the Australian outback and working hard from dawn to dusk to look after the camels.
Ahmed, however, has something on his mind that keeps him awake at night. Apart from worrying about being attacked by a bunyip or babalu – the bogeyman – Ahmed cannot stop thinking about the death of his father back in Afghanistan. Was his uncle involved in the death?
This is a historical fiction for older children and young adults. The story is engaging, with the likeable Ahmed recounting the story of the Gosse expedition and life as a young cameleer. Information about the life-and-death conditions endured by the early explorers; eighteenth century Adelaide; the history of Afghanistan; facts about camels; Afghani customs and religious observances; and the attitudes to the Indigenous Australians are all woven seamlessly into the story. The book’s themes include bullying, prejudice, hardship, endurance, friendship and hope. Based on the diaries of William Goss, Goldie Alexander cleverly brings his story to life through the eyes of young Ahmed. Her portrayal of the relationship between the Afghans and their camels is particularly touching, as is the inner journey Ahmed takes as he contemplates the mystery of his father’s death, his growing into manhood and the responsibility he feels to look after his family back in Afghanistan.
Goldie Alexander has produced an enjoyable and informative book. Highly recommended.
Five Senses Publications 2011
(A version of this review appears in Magpies Vol 26, Issue 3, July 2011)

Posted by Carole Poustie at 7:16 PM