The Year my Voice my Life Broke - John Marsden 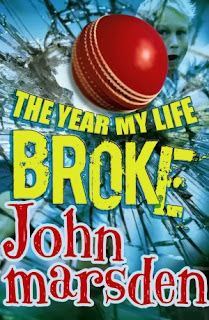 Tarrawagga is not only a hole, but the hole that the other holes fell into – the kind of town that gave holes a bad name. And not only has Josh ended up living here, he’s ended up living in the most boring street in this boring town. That’s what happens when the firm your parents work for goes belly-up and your family loses all their money and you have to live in your Grandfather’s crappy rental house. Things couldn’t get much worse for Josh; he wants to be back in Abernathy where he was popular among his peers, a leader, a stand-out sportsman – not here in this dump. So it’s not surprising that when he tries a different way of making friends at school by being one of the losers in the playground – both as an unplanned experiment and through abject lack of motivation – his situation doesn’t improve. Especially when Mr Surrey, the PE teacher, decides to have it in for him.
But life has a habit of throwing up surprises and Josh is in for his fair share of them. His boring street turns out to be not so boring after all. With the discovery of Harriet who lives next door with her policemen father and uncle, and a pair of eyes staring out from behind the closed blinds of the mysterious house on the other side, Josh ends up with a whole lot to think about, including why there might be a strange man lurking about in the back garden in the middle of the night.
If anyone is positioned to lure primary school boys into the pages of a book, it’s John Marsden; he has the ingredients down pat: mystery; adventure – of the bullets-flying-past-your-head kind; a tough time at school; annoying siblings; a fledgling romance; and sport – especially when the whole town’s reputation hangs on the results of a cricket match. Oh, and did I say humour? Lots of wry humour that will go down a treat with this target audience. The Year my Life Broke is about a boy whose ordinary world has shattered and who is thrust into one that is alien in every respect. All that is familiar to him is stripped away, even the seemingly rock-solid identity that has always served to ensure his popularity amongst his peers. Josh is forced to dig deep in order to honour his own integrity, and he does so in the way he knows best, channelling his natural athletic ability into the sportsmanship and team spirit of a climactic cricket match. Another Marsden knock-out. Recommended.

Posted by Carole Poustie at 3:18 PM No comments:

Email ThisBlogThis!Share to TwitterShare to FacebookShare to Pinterest
Labels: John Marsden, The Year my Voice my Life Broke 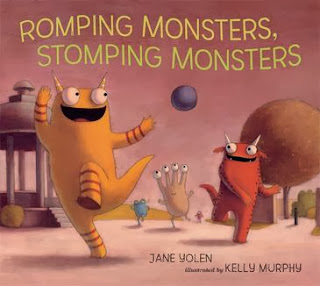 Yolen and Murphy are back with another romp for toddlers. After the success of Creepy Monsters, Sleepy Monsters, how could they resist more monster mayhem? This entertaining book about a couple of monsters who set out with their mum on a romping, stomping, escapade in the park will delight its target audience with a sequence of unframed double-page spreads choc-a-block with frolicsome fun. Skylarkery, merriment and boisterous exuberance abound in this book, whose monsters are the sort to have young tots giggling and chuckling rather than worrying about who’s hiding in the cupboard when it’s time for bed. The monsters that populate this story are so fun-loving and waggish the child reader will not mind in the least about their multiple eyes and arms, or their horns or gaping-mouths. Kelly Murphy has imbued her characters with warmth and humour; the slightly muted, colourful illustrations and detail on the page invite the young reader back for a closer look on subsequent returns. (It may take a few returns for the very young child to work out who the main protagonists are – in their orange and yellow – amidst the general monster jollity of each double-page spread.)


The text of Romping Monsters, Stomping Monsters is simple and spare. Rhyming couplets throughout, until the last few pages, Jane Yolen focusses on movement: ‘Monsters stretch. Monsters twirl. Monsters catch. Monsters hurl.’ The emphasis on monster sport and the all-important food scene where the monsters eat giant ice-creams will hold appeal for the target audience. The story ends with the monster siblings having a barney about who gets to go first at the drinking fountain, but all ends well when Mum elicits a ‘sorry’ and the text finishes with, ‘All better now’.
A delightfully whimsical read-aloud story about gambolling monsters and their gleeful shenanigans.

Nanny Piggins fans will be delighted to hear this rambunctious flying pig is back again, ready to wreak havoc on Christmas. She begins by causing a disruption at the local shopping centre, drawing all their customers away by going into competition in the car park with her Nanny Piggins’ Santa Photography Business. If the photo-shoot itself is not entertaining enough – with options for children to wrestle Nanny Piggins dressed as Santa in her specially designed bright red, fur-trimmed wrestling leotard, or read their present list out to her while being attacked by ninjas – she provides unlimited cake and hot chocolate to those in the line that extends all the way around the block. Next she trounces everyone at the Carols by Candlelight concert by going into competition with Nanny Anne and her choir, modifying the lyrics of the carols to include plenty of references to chocolate cake; tries to save Christmas by taking it upon herself to deliver toys to all the children in the world; has a disappointment with Boxing Day when she turns out in black silk shorts and boxing gloves; and gives the story of Christmas a run for its money when recounting her ancester Yudith Piggins’ priceless version of events when she claims to be midwife at the birth. All this plus Nanny Piggins’ Christmas recipes and tips, holiday fashion advice, games, and letters from Boris the Bear, Mrs Claus and Nanny Piggins herself.


From the moment you open this book you begin chuckling; there is a laugh-out-loud moment on every page. Nanny Piggins is such an outrageously incorrigible character it is impossible not to be drawn in by her impertinence and forthright lack of tact. R A Spratt has come up with a winning cast of characters: the human children in Nanny Piggins’ care, Samantha, Derrick and Michael, who ground the storyline and temper Nanny Piggins’ predilection to hazard-fraught eccentricity; the children’s irresponsible father, who is conveniently absent for much of the time; Nanny Piggins’ brother, a large, sensitive bear, prone to bursting into tears; and the various other Piggins family members prone to bursting through windows to announce their arrival.


It’s a winner. I haven’t enjoyed such an entertaining read in ages. Children will love it. Highly recommended. 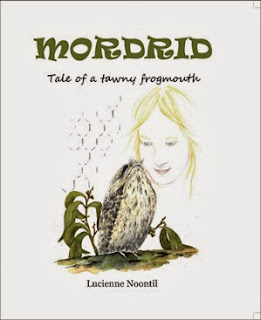 When Yvonne Cowling received a phone call on the 9th of December 1989, little did she know that that date would mark the beginning of an extraordinary journey, that she would form a remarkable relationship which would last for almost twenty-three years – and that she and a whole community would be heart-broken when that exceptional sojourn came to an end. The phone call was from the Melbourne Zoo and the culprit who stole Yvonne’s heart was a Tawny Frogmouth. Mordrid – as she would come to be known – wormed her way into the hearts of all who met her, including those of the children in and around the Knox Council, where she would accompany Yvonne – affectionately known as Boronia’s ‘Possum Lady’ – on her Wildlife Education Program school visits.


Lucienne Noontil has created a moving account of Mordrid’s life with Yvonne at the Boronia Wildlife Shelter. Written in rhyming verse in a gambit to appeal to the young child, the book recounts the demise of Mordrid’s life in the wild after an accident leaves her without sight and the remarkable way in which she adapts to her disability. The story relates the incorrigible way in which Mordrid insinuates herself into the life of her new family, watching television with them in the evenings and enjoying cuddles and pats from anyone who would oblige.


The illustrations in this book, watercolours – unframed and presented from a variety of perspectives – are spacious and uncluttered; they undergird the text, advancing the story and enhancing characterisation, positioning the child reader to care for Mordrid and to gain an appreciation for the affection of her expanding family unit. The double-page spread of Mordrid with her ‘surrogate’ chicks is especially striking. The closure is handled well with appropriate sensitivity for the young target audience.


Mordrid is a gentle book that commemorates the life of a very special bird.

Sunrise Reflections, 2013
Posted by Carole Poustie at 2:49 PM No comments: