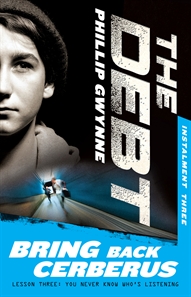 In this third instalment of the series, the plot becomes even more tangled and enigmatic; if falling into line with the requirements of The Debt was making things complicated for Dom before, life becomes interlaced with perplexing convolutions this time around. Sworn to secrecy by The Debt means secrets and lies become part of the fabric of Dom’s existence. After playing a nerve-racking waiting game, Dom is finally given the third assignment – to find Cerberus, the prototype of a new device before it hits the market and hand it over to the mysterious Anna Russo at her birthday party. And considering no one even knows what the device is – a new mobile phone, tracking device, whatever – Dom’s task seems impossibly difficult. To make things even more complicated, as well as hacking into people’s email accounts, Dom must learn how to break cryptic codes and find the answers to questions even Google won’t supply. The Dom Silvagni in this book is not the Dom the reader is introduced to in the beginning, before The Debt put its stamp on his life. Tech geek, school-wagger, private investigator, spy – resourcefulness, pluck and courage have become second nature.

This book is Janet Evanovich meets Ian Flemming meets Matthew Reilly. Packed with adventure, humour – often involving bodily functions of the smelly kind – computer tech-speak, facts about sport – running and the UFC (Ultimate Fighting Championship) – intrigue, suspense, conflict and first love, the target audience will LOVE this series. The prose is intelligent and superbly crafted, the characters three-dimensional and believable; the irony of being a rich kid with a debt that money can’t pay is played out deftly throughout the text. And Gwynne slips backstory from the first two books seamlessly into the story. Do I really have to wait until June for Instalment Four? A totally engaging read.


Posted by Carole Poustie at 10:47 AM No comments: 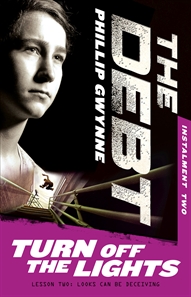 The Debt – Instalment Two raises more questions than answers. Dom’s next task is to turn off all of the Gold Coast’s lights during Earth Hour. How can a fifteen-year-old boy manage that? He has ClamTop – the mysterious laptop computer supplied to him by The Debt, that opens on voice-command – but he’s going to need a heck of a lot of resourcefulness to pull this one off. And it’s complicated. Not only does Dom have to race against the clock to put a strategy in place, he has to beat Fiends of the Earth at their own game, to stop someone being maimed, or worse.

And how is Dom going to prevent Tristan from taking advantage of Imogen – when he’s discovered they plan to meet when the lights go off? Then there’s Dad acting weirdly. What did he mean when he said The Debt didn’t necessarily impose an imposition and ‘to turn adversity into advantage’? Why has he lied all these years saying he doesn’t ‘speakka the wog’ when Dom overhears him having a conversation in perfect Calabrian? And what of that comment, ‘my hands are bloody but unbowed’?

If all this is not baffling enough, why is taxi driver Luiz Antonio following Dom? And why did Seb, Dom’s running mate, set him up to run through Preacher’s Forest – which the kids at school say is littered with mutilated and mouldering bodies – and where Dom is shot with a tranquiliser dart that knocks him out cold? What of the kidnapping incident with Zoe – the Zolt’s sister? And the men in the balaclavas with baseball bats so desperate to retrieve the Double Eagle coin? And for that matter, the Zolt. Where is he?

This next instalment in The Debt series is peppered with intrigue as the plot becomes more and more clue-laden, making it impossible to stop at book two.

Posted by Carole Poustie at 10:41 AM No comments:

Catch the Zolt: The Debt Instalment One - Phillip Gwynne 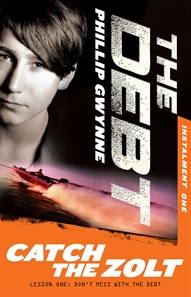 All up, Dom Silvagni doesn’t have much to complain about. If you took out of the equation Tristan Jazzy’s annoying habit of leaving his sister’s bike lying about for Dom to almost trip over on his early morning run – made all the more annoying when it happens right in front of Imogen Havilland’s bedroom window – then life is pretty good. Dom lives in luxury with his parents and younger brother and sister, and one-legged grandfather, Gus, in Halcyon Grove on the Gold Coast. Gus is also Dom’s coach and there is not much that takes priority over running in Dom’s world.

However, on Dom’s fifteenth birthday everything changes. First he is stalked by a mysterious white van on his morning run, and after hearing a whooshing sound, wakes up on the pavement, unable to account for four minutes of his life, with only a mosquito-bite-like mark on his hand to show for it. Then, after discussing secret men’s business with his father and Gus, Dom finds out that he is responsible for clearing an ancient family debt by performing six formidably difficult tasks. The first instalment is to catch the Zolt, a seventeen-year-old who has stolen cars, boats and even light planes from nearby Reverie Island. If he fails to deliver, The Debt will take their pound of flesh. As they did with Gus.

This leads Dom on a thrilling adventure, where he must befriend his arch-enemy, the self-centred Tristan, and watch him try to seduce Imogen, Dom’s friend since childhood. As the race to find the Zolt moves to Reverie Island, it is impossible to discern the difference between allies and enemies; Dom must use every ounce of courage and resourcefulness he can muster, not only to preserve his family’s honour, but to preserve his life.

This adventure series, targeted unashamedly at upper primary school (and I would say teenage) boys, is Phillip Gwynne’s first foray into writing for this demographic. It is a ripper of a yarn – suspenseful, cleverly plotted, well-crafted and funny. The text works hand-in-glove with the reader’s intelligence and assumed general knowledge which creates both the effect of rounding out the central character, Dom, through whose voice we hear the events of the story unfold, and aligning the reader to empathise with him in his quest. The target audience will identify with Dom’s strength of character as he negotiates his various predicaments, and be drawn into the story not only because of its page-turning quality but by the authenticity of the characterisation – well supported by voice, setting and subtext.

Some adroit foreshadowing in the first book sets down clues and sets the reader up to unravel the larger mystery as the series progresses.

Posted by Carole Poustie at 10:35 AM No comments: 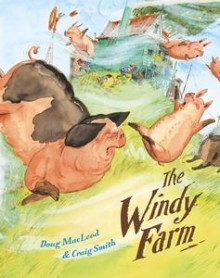 When your family lives on the windiest farm on Windy Hill, because it’s all they can afford, life can be tricky. Everyone except Grandpa is in constant danger of blowing away. Even the pigs. But inventor Mum comes up with a solution that sees everybody– chooks and all – fitted out with heavy metal shoes. But on the day that half the house blows away – even though Grandpa says, ‘Never mind’ – something must be done. When rich Uncle Jeff, who has an oil well in his back yard next to the clothes line, says, ‘it’s your silly fault for buying such a windy farm’ and refuses to help, a bit of ingenuity and Grandpa’s power tools save the day. Until the power bill arrives. It’s a sad day when the family must sell off Big Betty, Grandpa’s favourite pig. But Mum has an environmentally inspired idea that turns the tide on the family’s fortunes – by turning plenty of windmill blades. Big Betty comes home and everyone lives happily ever after. Except for Uncle Jeff, who gets blown away. ‘Never mind,’ says Grandpa.

It is always a thrill to open a new Doug MacLeod and Craig Smith collaboration and The Windy Farm provides no exception. Let’s hope they keep them coming. The text and spirited illustrations are immediately appealing; the simple storyline, infused with whimsy and humour, effectively sets the stage for Smith’s illustrations, which – as always – breathe vitality, pith and energy into the story. The title is clever and the story about how a family harnesses the power of the wind employs a gentle subtextual teaching element for its young audience without being prescriptive. There is plenty of detail in the illustrations – crafted in gouache and acrylic, and gloriously waggish – to provide a child new discoveries on subsequent returns. They will love, for instance, the page where the house nearly blows away: a bra and underpants go sailing past; the photos fly off the fridge; the moon shines from inside the window while bats are shaken from their sleep in the roof; then Grandpa’s look of surprise as the door swings open to reveal him sitting on the dunny. A delightfully playful book with an environmental edge.
Penguin 2013

Posted by Carole Poustie at 10:20 AM No comments: 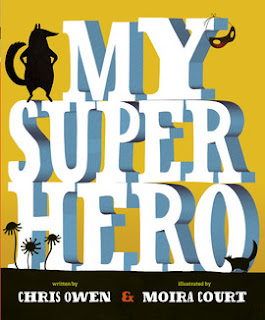 This first picture book from Chris Owen and Moira Court has all the right ingredients to make it irresistible to its young target audience: it’s visually striking with bold, colourful and endearing illustrations; the rhymed text is perfect for reading aloud; it’s about animals with human qualities; it features repetition that invites the reader join in (KABOOM! KAPOW! KABAM! KASPLAT! My superhero’s not like that.); and it has suspense – the storyline is a riddle, keeping the reader guessing who the superhero might be. The book is a series of lush double-page spreads, each featuring one of a variety of mask-clad animals enacting their superhero role with the accompanying text in four lines of rhyming verse. Every so often the mysterious narrator reminds the reader with a reprise of KABOOM etc to keep guessing. This page then opens out to a majestic quadruple spread with more visual and textual clues supplied to egg the reader on. At the end of the book is an information page detailing facts about each of the animals featured in the story.

My Superhero is an adorable book that small children will be drawn to because of its simplicity, clean design, vibrancy of colour and warmth of characterisation – which comes through in both text and illustrations. Adding to the impact of the book as a whole is the clever use of point of view. The narrator is not seen until the last page, and the superhero animals are presented from a variety of angles: the bear from close-up and front-on; the armadillo, cheetah and chameleon from the side; the goat and the eagle from underneath and so on. On the quadruple-page spreads we see the scene – and clues – through the eyes of the narrator.

Asking to be read aloud, this is a book that will provide many pleasurable reading experiences for child and adult alike. There are opportunities, too, for discussion about the interesting range of animals presented in the story. Most engaging and entertaining.