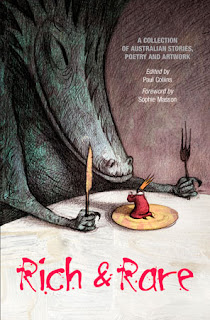 What a robust and eclectic aggregation of story is Rich and Rare. When over forty-five of Australia’s finest writers pool their collective imagination to produce an anthology of short stories for middle school children, the result, overall, is a heartily gratifying read. There is something for everyone in this lot. As the back cover blurb proclaims, these are ‘stories to sink your teeth into … a world of natural (and unnatural) gifts on every page – from humour to horror, thriller to fantasy – encompassing the past, the present and the future’. The collection also includes adventure, crime, science fiction, romance, ghost stories and poetry – which pretty much caters for all tastes. (The graphic by Leigh Hobbs entitled ‘A Writer’s Morning’ would plant a smile on any writer’s face, the target audience aside.)

After an enticing foreword by Sophie Masson, that, let’s face it, the kids will probably skip, the reader is treated to a sumptuous array of content and writing styles. From Gary Crew’s Dickensian ‘Dr Lovechild Regrets’ about the haunting of a sadistic and sour old teacher with a penchant for persecution to Susanne Gervay’s ‘Grandma in the Sky’ in which a young girl seeks solace in talking to her teddies and dollies as she comes to terms with the loss of her grandmother, the reach of theme is broad. Readers are treated to Michael Gerard Bauer’s trademark humour in ‘The Knitting Needle Ninja’ and to Catherine Bateson’s beautifully crafted and cleverly understated ‘The Stray Dogs Café’ in which they are credited with an ability to make their own story connections. Sophie Laguna’s mini essay on the incorporeal nature of hope in ‘Hope Cannot be Photographed’, Lucy Sussex’s horror story, ‘Angelito’, about a child rising from his grave during Mexico’s Day of the Dead festival and Gabrielle Wang’s allegorical ‘The Two-Faced Boy’ in which a boy with everything learns a life lesson when a jinn steals his face are more examples of the rich diversity and scope of the anthology. Phillip Gwynne’s ‘Tidy Town’ in which the main character dares to go against the grain in a world that would have him conform, Kerry Greenwood’s who-dun-it, ‘The Glass Egg’ and Paul Collins’ fantasy story, ‘The Black Sorrows’, where Jelindel must rescue an angel from the depths of the sewers … Poems by Sherryl Clark, Meredith Costain and Michael Wagner … The list goes on.

This is a significant collection of stories, poems and artwork that would be a welcome addition to any bookshelf, be it in a school or public library, a child’s bedroom or the family living room. Rich and Rare truly does offer something for everyone.

A version of this review appears in Magpies
Posted by Carole Poustie at 11:58 AM No comments: 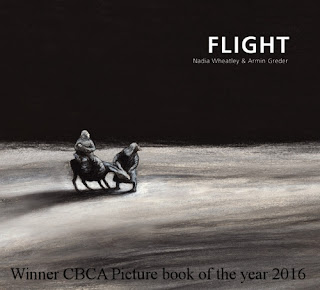 The first thing that strikes you about this stunning picture book is its Cimmerian appearance. The dark starkness of the cover, end papers, title page and a quick flick through the rest of the book indicates the likely tone of what is to unfold within its pages. It’s not surprising, then, on the first page opening to see a young couple with their babe in arms cowering in the shadows of night and to read, ‘Tonight is the night./The family has to flee./They’ve been tipped off that the authorities are after their blood.’ We follow this middle eastern family as they make their way across hostile landscapes, battling the elements amid the ravages of war. Throughout the text, the reader, along with the characters, is subjected to the relentless tension of whether one of the significant obstacles and dangers along the way will eventually cause the family’s demise. All the while, at each crisis point the father entreats, ‘Inshallah’ – ‘God be willing’, the mother soothes the baby, ‘Lulla lulla … lulla bye bye …’

This is a powerful story about the plight of the refugee. The visual and verbal texts work to produce a rich alchemy of multi-layered significance of meaning. The work invokes the power of its obvious intertextual biblical references to add weight and depth, with the little family following a star for guidance in the desert and, until it bolts, the use of a donkey for transport. The employment of omniscient point of view, where we learn each of the characters’ thoughts conveyed to us by an external narrator creates a distance which feeds into the starkness and mood of the text. Armin Greder has created a lush landscape of sombreness and despondency. His evocative illustrations are bold, haunting, and disquieting. His broad brushstrokes in every shade of black, the strong movement of line and the spare unframed double-spreads work together to produce an expansiveness that is in clever juxtaposition to the unfreedom of the refugee protagonists. A thought-provoking picture book for primary school children with appeal to teenagers and adults, this work of art is a timely addition to the global world of literature; it does not presume to answer the hard questions but neither does it deny a filigree of hope, however tenuous in today’s climate that hope may seem.