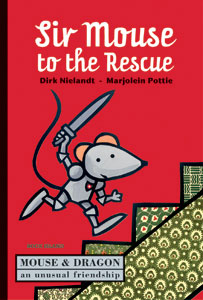 Everything about this book is delightfully unexpected. Marjolein Pottie’s illustrations, using collage and paper cutting techniques, are immediately captivating and draw you into the world of the story. Even the floral patterned end-papers attract attention. The result is a stunning marriage of simplicity and detail, capturing the essence of the characters with vibrant colour and movement.

One surprise follows another. For the adult reading this story, expectation is turned on its head. Not only is this a book about a mouse who likes to wear armour because she believes she’s a knight, it’s a story about a knight and a dragon who don’t fight. And where the mouse with pluck has it all over the dragon. (Or so she thinks!) For the younger reader who may or may not appreciate the subtleties of the intertextual references to fairy-tales, the literary experience will, at the very least, be a refreshing mix of the unpredictable and unanticipated.

Wonderfully postmodern, Sir Mouse to the Rescue is a laugh-out-loud parodical poke in the paunch to tradition and patriarchy. When someone calls for help from the high tower, it’s the prince who needs rescuing. And when he later asks Mouse to marry him so they can live happily ever after, Mouse says no, because she doesn’t want to become a princess and wear a dress – she’d rather be bold Sir Mouse and wear her suit of armour. Dragon is relieved too, as she’d rather have a knight as a friend than a princess. The characterisation in this book is fresh and original; unsurprising that Dirk Nielandt is a scriptwriter for Belgium television and wrote some of the scripts for the Dutch version of Sesame Street; the strength of his craft comes through in the text, which is sharp, witty and packed with irony. When Dragon dresses up as a knight for her fancy dress party and Mouse objects, having no concept of ‘dressing up’, ‘Dragon thinks something’s not quite right. It’s a fancy dress party, but no one is wearing a costume’. The hint of narcissism in Mouse’s character works well against the easy-going character of Dragon, who can be authoritative when she needs to. When Mouse decides to leave and go on a long journey, because that’s what knights do, even though Dragon cries and says she’ll be lost without her, Mouse remains adamant until ‘Dragon glares at her. “You’re abandoning me,” she says. “That’s not nice. That’s not what friends do – especially not knights.”’

Set out in five short stories with bite-size paragraphs, this text is ideally suited to the target audience of beginner readers – and would work a treat read aloud.

An entertaining and gratifying read.


Posted by Carole Poustie at 9:35 PM No comments:

In the Wings - Elsbeth Edgar

When Ella sees the auditions notice up for A Midsummer Night’s Dream at school her heart lifts – then sinks. Longing to be part of the cast she puts her name down, instead, to help backstage. As she always does. Mr Paterson’s suggestion to attend rehearsals so that she can implement her creative ideas for set design becomes a blessing and a curse. It’s great to work with Lou, the efficient but friendless year seven Mr Paterson has assigned as her assistant, but to watch the members of the cast being put through their paces, reciting the lines Ella knows by heart, is torturous. She would give anything to be rid of her stage fright, to trade backstage for the stage itself.

Life takes a twist when Mum returns from a visit to England with Ella’s estranged grandfather – a retired actor – who is to stay with the family after suffering a heart attack. And then another couple of twists when the year nines are late back from an excursion and Mr Paterson unexpectedly instructs Ella and Lou to fill in during an important rehearsal; Ella does such a stellar job being the fairy that, when Tricia is suspended from school for stealing, he offers her the part. Ella rises to the challenge, not only of facing her fear of stage fright, but of playing against the conceited Sam Hennessy as Puck – and what unfolds as a result brings more than a few surprises for all involved.

In the Wings is a story that is unafraid to plumb the depths of the human condition as it plays out in the lives of Ella and her friends and family. The young teenage or pre-teen reader, as the story unravels, is positioned to observe and experience – alongside Ella – a gamut of life situations: the fragility of the body when illness strikes and the tenuous balance between life and death; the challenge to tolerance in the face of difference; the longevity of grief around a lost relationship; the impact of shame as a consequence of poor judgement and a bad decision; the renewal that comes with loyalty, trust and resilience; and the thrill and hope of first love. Elsbeth Edgar expertly situates her characters in a school setting that will be familiar to her target audience and raises issues close to the heart of teenagers. She invokes empathy for Ella, allowing readers to engage with Ella’s thoughts and feelings and challenges.

This book is engaging from first page to last. It is well crafted, buoyed by conflict, tension and mystery with believable, three-dimensional characters. The references to Shakespeare and the world of the theatre add vibrancy and depth. A rewarding read that stays close on your heels well after you’ve closed the covers.

Posted by Carole Poustie at 9:24 PM No comments:

Email ThisBlogThis!Share to TwitterShare to FacebookShare to Pinterest
Labels: Elsbeth Edgar, In the Wings 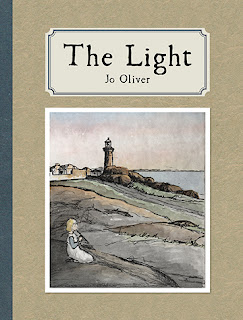 The Light is the story of a lighthouse keeper’s family living on Montague Island off the coast of NSW early last century. Narrated by the youngest child, Louisa, it documents a day in their life: tending the animals, fetching firewood, milking the cow and collecting eggs, baking bread, churning the butter and cleaning the lighthouse. Even though the chores must be done, there is always time afterwards for Louisa to take her tin whistle down to where the seals bask in the sun. As she plays for them, her music carries over the wind and waves and across the island. Music weaves a vital thread through the narrative: Louisa hears her father playing his fiddle alone in the night as he tends the light, and in the evening the family gather around the piano as her mother plays and the others join in. And it is the sound of their music in the midst of a raging storm that welcomes the four shipwrecked men and ‘wraps around them like a blessing’.

This is a beautiful picture book, the third by Jo Oliver. The text has a straight-forward old-world feel to it, uncomplicated, in keeping with the theme. Its simplicity is reflective of the times: ‘Mother and Father play some jigs and then the soft songs of Ireland and Scotland, of wind and moor and sea. The boys whittle and Johanna stitches clothes’. The illustrations, too, work well with the theme, the colours subdued and derived from the original plans for the lighthouse and keepers quarters. This excerpt from the New Frontier Teachers Notes describes the technique used by Oliver: ‘…solar plate etchings, a medium in which drawings are transferred to a metal plate using light exposure. The plate is then inked and rubbed back before printing. Ink left on the surface of the plate, or print tone, gives gradations of light and dark in addition to the etched lines. The prints are then hand coloured in watercolour.’

To highlight the importance of music both to the story and as a comfort and connection to the families who lived on the island, a watermarked music stave has been used as a backdrop to the illustrations on relevant pages.

Readers will find The Light both engaging and educational. It is a gentle book that holds great appeal.

Posted by Carole Poustie at 9:11 PM No comments: