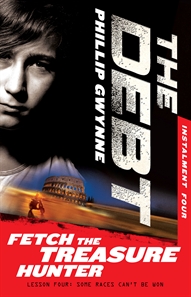 If you found The Debt books one, two and three difficult to put down, then Fetch the Treasure Hunter will be impossible to close. Dom’s world spins out of control at tornado pace in book four of this fabulous series. Think death-defying moments. A lot of death-defying moments: heart-in-the mouth wall-scaling – including a climb over the Colosseum mid Rolling Stones concert; heart-pumping stunts in underground drains and tunnels; heart-stopping, truck-skitching skateboard rides down treacherous mountains; and heart-hammering brushes with knife-toting youths to name a few. Be prepared to suspend disbelief in this gratifying adventure as the Debt intervene once again in Dom’s life to land him in Rome to run in the World Youth Games – but more importantly, to track down the treasure hunter E Lee Marx. Like the others in the series, this book is superbly crafted and plotted; it’s funny and smart; the jigsaw’s coming together but clues aplenty remain to keep the reader guessing. Roll on September!

Posted by Carole Poustie at 8:03 PM